Bulgaria: To See the Sea Once More – 30th Aug

A low murmur in the distance. A rumble, accompanied by increasing vibrations. A chill shoots down the spine. The ever nearing sound of doom indicates only one thing. No matter how fast you pedal there is no escape. It moves closer. Should you stick firmly to the road’s edge or move out a little to avoid falling to oblivion? Adrenaline pumps through the body as the beast draws near. It’s all flight, fight would be futile. The gigantic monster eats up the path we’ve trodden. His roar becomes deafening as you feel his breath on your back. Raging past, you dare not look back, dare not wobble. Muscles contract and prayers are spoken. Leaving only a cloud of dust behind he ploughs on. The nervous cyclist breathes another sigh of relief. Welcome to the Bulgarian highway. 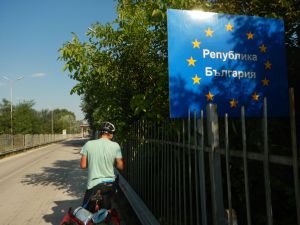 An online article argues that the UK should allow cyclists to be allowed on the hard shoulder of British motorways, as is the case in Bulgaria. Although I’m not convinced, the Bulgarian motorway was far safer than the one-lane highways where we jostled for road space with cars, trucks and coaches. The sheer quantity of roadkill in Bulgaria did little to calm our nerves! From foxes to badgers, snakes to lizards and owls to deer, Bulgaria’s roads were a nauseating wildlife patchwork. Just as in Serbia, small roadside shrines and memorials reminded us of the dangers of the roads on which we travelled. Hauntingly the monotone faces of the deceased stared on as we passed.

Bulgaria was a mishmash of unusualness and strange occurrences, which began from the moment we arrived in the country. Our very first act in Bulgaria was to stamp our own passports (probably not condoned by the EU). After that we arrived in a small village looking for an evening meal only to be greeted by a Spanish speaker offering us cans of Coke. By the end of Day One we had already spoken English, French, German, Spanish, Russian and were having to grapple with Serbian and Bulgarian too! 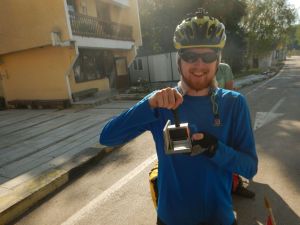 Stamping our own passports!

Northern Bulgaria remains frozen in the past. Large Communist squares, overgrown and weary-looking through neglect, occupy the hearts of every village and town. Socialist statues stand proudly, in vain, almost forgotten. The towns are home to countless elderly  people. Children play in the streets. But there are no young people. “There are  no jobs, no opportunities here for them,” one elderly fellow tells us in perfect German. Berlin had called him many years ago, just as many European cities now call the Bulgarian youth. The northwest had once been the centre for tyre manufacturing in the former USSR. Signs for ‘gumi’ (tyres) still line the roads, but they bring little to the local economy now. People are very poor here; horse, or cattle, drawn wooden carts are the norm. 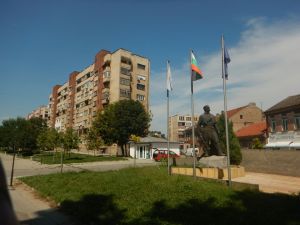 Since we had decided to cycle the length and then breadth of Bulgaria (rather than cut diagonally across) in order to visit a friend from school and to take in the beautiful Bulgarian Black Sea coast, we had a lot of mileage to cover in just a few days. 100km+ a day for a week was not easy going, especially on hilly roads. Fortunately, due to EU funding, the roads were in better shape than they might otherwise have been. At the end of the cross country slog we knew that we would have beds with our names on. This eased the pain we felt in our legs. 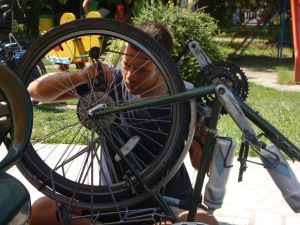 A rare bit of bike maintenance

Not all roads lead to Rome!

Despite being linguists we were having trouble ordering food in restaurants. Chicken was not a problem and chips were the easiest side to ask for. Unfortunately this meant chicken and chips were on the menu for several days in a row. Luckily we did have some variation: chicken breast, chicken wings and chicken nuggets… In one restaurant, having been literally taken around the houses by a man who cycled barely faster than I walk, we ordered three chicken and potatoes (hopeful of any form apart from chips). Ten minutes later we were informed there was only enough chicken for one, twenty minutes after that there wasn’t even that much chicken. We promptly left, no chicken = no custom. 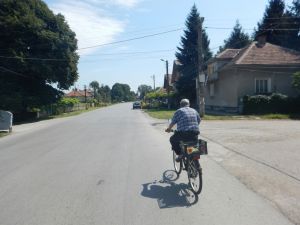 Going around the houses to no-chicken restaurant

Wild camping remained our accommodation type of choice in Bulgaria. On one night we found ourselves running out of options as night began to fall (a consistent theme of this trip!). Cycling through a village to what Google Maps said was a green space we came across an abandoned tobacco factory. We pitched tents between the factory and the stream, as far from the stray dogs as possible and settled down for the evening. Sometime later, during a heavy downpour, Nick and Will were woken by the sound of what can only be described as rockets or flares. Were they trying to seed the clouds? Were we under attack? I slept on, oblivious. On another evening, when looking for a green space away from the main road we came across an old man and his cow. Despite a few cowpats the field was suitable. Nick spoke to him in Russian, he replied in Bulgarian and the pair of them seemed equally baffled. Nick and Will then went to a farmhouse to investigate the situation. Armed with a Bulgarian phrasebook I attempted a full blown conversation…

Me: (running out of appropriate phrases in the very limited phrasebook) What’s that? (pointing at his cow)

Him: No. Crava not good.

Now at an awkward juncture and with no vocabulary left we waited in silence  for Nick and Will to return. Almost jogging back they called out, “They threatened to call the police, let’s go!”

A campsite with a view 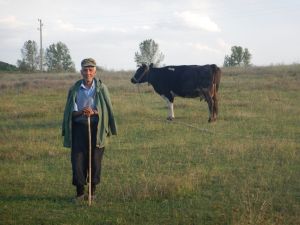 Arriving in Varna, a city on the Black Sea, we were treated to first class hosting by Aleks and his parents. Two fabulous, several course evening meals with local wines, spirits and teas and coffees got us back on our feet after a hard week cycling. Discussions about Bulgaria past and present, about Communism and about the future shed a great deal of light on a country we didn’t know nearly enough about. Aleks and his parents really gave us a home away from home and we are all very grateful to them for that!

In recent times the Black Sea coast of Bulgaria has become the modern equivalent of Magaluf, where Brits Abroad go to savour sun, sea, sand, and of course, a few beers! (2.5L of good local beer in the supermarket only set us back £1!) It’s not only Brits, however, who have discovered this holiday treasure trove. Russians and Ukrainians were in abundance. Most tourism focused around the resort towns of Obzor and Byala, separated by steep hills (to stop the foreigners wandering off?). Further down the coast, Sunny Beach, where it was ironically raining when we arrived, was a package holidaymaker’s dream – water park, funfair and British themed restaurants! Land in the local area is going cheap (€1/m²), worth an  investment if you’ve got a few Euros left from your last holiday! 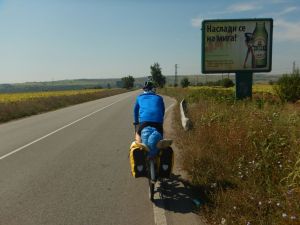 How beer is advertised in Bulgaria 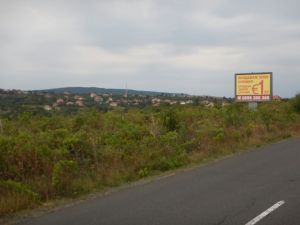 Leaving the coast behind we turned inland, sights set on Turkey, the other side of the mountains! Before commencing the climb we spent the night at the end of a lane outside a couple’s house. Their cat attempted to share our tent, Nick was having none of it. Looking for more sympathy it went to Will, only to promptly return and curl up with Nick. In the morning, having expressed an interest in football, the wife brought out photos of her daughter, a semi-pro, and did her best, using body language, to tell us how beautiful, intelligent, kind, and so on her daughter was, a real catch! But we had to forge on.

The end of Bulgaria

Climbing to the border 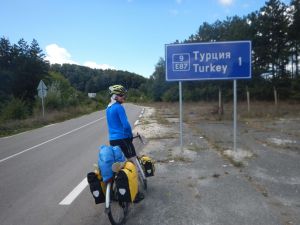 Twisting, turning, winding, the steep road took us to the peak of the mountain, the edge of the EU. Arriving at the Turkish border our e-visas were barely looked at, let alone checked. A red stamp indicated our being accepted for entry. The gateway to Asia awaited!