Nick, Laurence and Will set out from Buckingham Palace in London on 10 July, heading for Istanbul. Leaving the UK through Dover, their route took them through France briefly and then into Belgium (where they visited the Ypres battlefield, Ghent, Leuven and Hoegaarden). Passing through the Netherlands (Maastricht), they travelled across Germany from Aachen to Cologne, Bonn, Nuremberg, Munich and Marktl, getting some hill training in Bavaria. On 3 August  they reached the Danube in Austria, which they then followed into Bulgaria. The longest day on this leg was a 222 kms push from Linz to Vienna on 4 August. From Austria, briefly into Slovakia on the way to Hungary (Bezenye, Kocs, Budapest, Domsod and Kisszallas) and then Serbia (Feketic, Belgrade, Usije and Tekija). Taking a photo opportunity in Romania, they cycled on into Bulgaria, reaching Varna on 25 August. Doing the ice bucket challenge at Marinka on 29 August, they made their way into Turkey and to Istanbul on 1 September by way of Kirklareli, Saray and Catalca, having pedalled over 3800 kms. 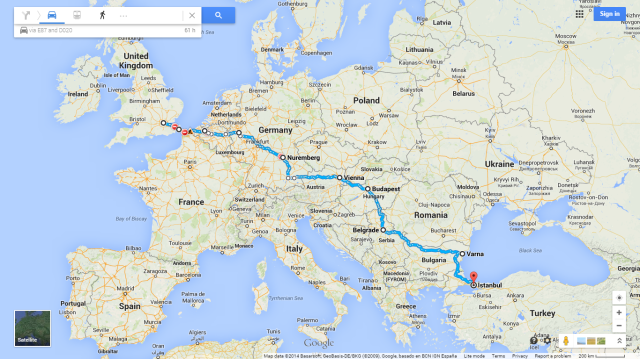 Laurence and Nick set off from Istanbul on 15 September to cycle the length of the Black Sea coast of Turkey, reaching Batumi in Georgia on 5 October. They did some more hill training through the Goderdzi Pass (2025m) on their way to Tbilisi, and from there made their way to Balakan in Azerbaijan. Crossing the country to Baku, they found their first hotel had failed to register them and so they were deported. Luckily in the right direction, as they took a ferry across the Caspian to Kazakhstan (Aktau). From there by train to Beyneu, before cycling the length of the Kyzyl Kum desert in Uzbekistan (about 1200 kms), the train being necessary to make up time in skirting around Turkmenistan. Desert oasis stops were made in Khiva and Bokhara before they crossed the border to Tajikistan and reached Dushanbe on 20 November.

On 27 November Nick and Laurence set out from Dushanbe to make a winter crossing of the Pamir mountains, taking a route along the border with Afghanistan with a short loop into the country from Khorog to Ishkashim. They then started tackling the hardest part of the second leg, through high passes and cold weather, peaking at Ak-baital (4655m) on Christmas Eve. A final hard push through the Kyzyl-art Pass (4280m) saw them reach Sary Tash in Kyrgyzstan, and from there to Kashgar on 29 December. Since Istanbul they had pedalled over 6300 kms, or some 10,200 from London.

Laurence and Nick left Kashgar on 5 January, heading to Kuqa and Luntai. From there they crossed the Taklamakan desert to Qiemo, setting what they hope is the speed record for the fastest unsupported north-south crossing (560 kms in 48 hours).  Heading on to Golmud, they made their way up to the Tibetan plateau, through several 4500m passes, on their way towards Chongqing. Continuing on through the hilly province of Guizhou and then into Guandong, they took a route to Guangzhou and finished at The Peak in Hong Kong on 28 March.

2 Responses to The Route