Getting closer to the deep end – out of the EU and into Serbia!! – 20th Aug

Having been warned by several Hungarians to avoid Serbia at all costs and with no rerouting option in the end we just had to take the plunge and hope for the best! We crossed the border and it was the first passport check since Calais – since Serbia is not yet in the EU. Serbia was also our first country that used Cyrillic script on road signs. Fortunately, Nick stepped to the fore with his GCSE Russian and we were able to muddle through!

After the warnings we decided wild camping – much to my disappointment… – was too risky and so we headed to one of three campsites in Serbia. Before arriving though, we had the fortune to pass through – according to an old guy on the side of the road- Vidic’s hometown (a Manchester United star and the pride of all Serbs – apparently)! Off went Laurence following this local character to Vidic’s birthplace. Not being one to miss a potential Tweet we took a few snaps and were off – only to find out later Vidic was born about 250 Km away!!

We arrived at the campsite to be greeted by ‘Steve’, a large chap wearing a flowery pink shirt. After a cheeky wink at topless Nick, he showed us to his less than crowded gem… and we left him with Nick in a slightly darkened room to sort passports!!
With room for about 100 tents we were the only campers! After setting up camp, we headed to Steve’s more than average restaurant for our first taste of Serbian cuisine.
Meanwhile he’d taken the liberty to try to add Nick on Facebook… but hadn’t managed it! Storming down the stairs, Steve started to chastise Nick and got very emotional. Trying to move the conversation on, I dared to ask Steve if he’d cooked the food himself. Steve, a slightly touchy chap, took this as a personal attack and the whole thing went from bad to worse! We settled up and went back to the tents all in agreement that wild camping would have been far more predictable than a night at Steve’s! Fortunately we saw no more of Steve. 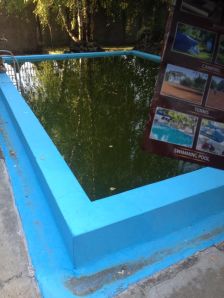 Steve’s Pool – what we thought we’d get and what we got!!

In the morning we pushed down to Novi Sad to rejoin the Danube. We came across a cool cycling cafe there where we met owner (Anna) and another couple (Jonny and Alex) who were following a similar route to us.
After meeting them we decided to aim for Belgrade that evening. Pretty uneventful cycling followed until we reached the top of a hill to find a BMW that had supposedly ran out of fuel. We stepped in to lend a hand. As we got to the top, the driver got out and leaving the window down of this unlocked BMW jumped into his friend’s car! We moved on swiftly, hoping we hadn’t left too many finger prints over it!!!

We arrived into Belgrade to find our hosts (a couple who Jonny had met on his travels) lived on one of the most exclusive streets in the city. After cycling past the US and Chinese embassies we found our place about four buildings down! To tell the truth, it went through my mind (as we were cycling past the residencies of countless Ambassadors) that the couple had pulled a great prank on Jonny but fortunately all came together!

We spent a couple of nights in Belgrade and met up with a couple of Lobby’s friends from Trinity. Being keen athletes, it was only after Mihajlo insisted, that we agreed to show our faces at the largest beer festival in Eastern Europe. After a few beers, we were jigging along to Orthodox Celts – a local band playing traditional Irish music. The crowds loved it!! In true Serbian style, the diehard fans formed what they called ‘pits’ – basically groups of people who would run into each other aimlessly in the name of fun!!

After the festival, we then visited a splav – a permanently moored nightclub boat. Knowing we’d agreed to be on the bikes early the next morning we jumped at the opportunity to rave into the early hours… as you would!
We got back to the house at 6 am and into the tent just as the sun was rising! We found another tent had been pitched. This time it was another couple Jonny had met! The hosts surely got more than the bargained for when the offered Jonny a place to stay. To date, over ten people have camped there on the back of this invitation. As we were leaving John and his girlfriend were asking to stay another week. They’re probably still there at the time of writing!!!

After a late start, we cycled about 40 km out of Belgrade and came across two old chaps eating watermelon by the roadside! They insisted we join them for a coffee. Lobby – not being a coffee drinker – asked for a tea but our trusty translator, Nick, somehow managed to plant the idea Lobby was not just a drinker but an extremely heavy one!! It wasn’t long until he was given a beer bottle filled not with beer but local home brewed spirit – rakia. More than contempt, he sipped away on the 40+% liqueur as we had coffee. We decided we’d stay at the guy’s place and after a dinner of fried eggs in his mosquito filled basement, we set up camp in his allotment!!

Due to budgeting issues, on last day in Serbia we ate only bread and drank only water. Just what you need when you are about to start an eight days of cycling 100+ km on the trot!!  In the evening we stayed at a campsite just off the Danube, overlooking Romania. The place was free on the condition we ate in the restaurant. We coppered up and got a pound or so together. After explaining to the disgruntled owner we had no lev, euros or even dollars, we were allowed to stay on the condition we bought a plate of chips. We did and had an absolute ball – as you’d imagine!!

Our first view of Romania

As we neared the Bulgarian border, warnings from the Serbs started about the dangers that awaited there!!! After the kind hospitality we’d received in Serbia (with the exception of Steve) we’d cottoned on to the whole thing. On each border, the country to the East is always going to be worse… or so they say!!

We crossed the Iron Gates (not as cool as it sounds) into Romania – just to say we’d been and do a Tweet!! Disappointed by the lack of an official EU sign, we turned around and left!! Crossing back into Serbia we pushed on up to the Bulgarian border. If that’s not getting the most of #openborders I don’t know what is!!! 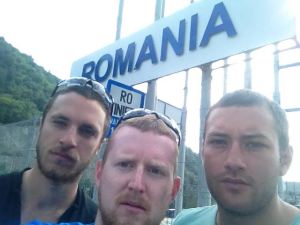 Romania in all her glory!!