The midday sun beat down on the little iron bridge leading to an unknown land. A heat haze shimmered, masking the soldiers opposite. Below, ice floated down the river. Above, snow capped mountains flanked the border on both sides. The heavy thud of boots signified the commander’s arrival, a three star general, with the evidence shimmering on his epaulette. “Are you sure you want to go to Afghanistan?” It sounded more like a warning than a question. We nodded. The rubber stamp slammed down on our passports. And so on 10 December we began our walk across the rickety bridge, each footstep ringing out loud and clear. It was the longest walk of our lives, like something from a film, as if part of a prisoner exchange, except no one was coming from their side. Half way across we turned our heads. Nerves and worries combined in a vicious concoction, but there was no going back now. We continued. AK47s greeted us, leading us to their border post. Ushered into a side room we were faced with the commander, in traditional dress and Afghan cap, sat, crossed legged, on throw pillows. “Why do you come to my country?” More aggressive than pure small talk. Our nervous answer about the culture and people seemed to please him and we were beckoned to sit and drink tea with him. An offer we could not refuse! With a Tajik as the Farsi-Russian translator we discussed our proposed route much to the commander’s surprise. “Tourists don’t come here,” he told us, “if they do it’s by 4×4!” He went on to reassure us that there was no Taliban presence in the area, but that on bicycles we should be more seriously worried about the wolves. Hopefully we wouldn’t get eaten, he joked, as we left – not overly reassuring! This was it, we were in Afghanistan.

Our first few kilometres in the country gave us an unappetising taste of the road to come. Our route through Afghanistan along the Panj river is an old donkey trail that has been turned into a semi-functional road with help from the World Bank and Germany. The path, for it cannot really be called a road, is a sandy track that winds its way up and down the hills next to the river. The inclines we faced, both up and down, were steeper than anything we’d yet come across. Even cycling along the flat was pretty much impossible due to the deep sand. Pushing the bikes up the steep ascents and attempting to hold onto them down the even steeper descents was a nightmare. Cars were having to be pushed up the hills too, so we were in good company. Freezing cold streams crossing our path, ice sheets and rubble only added to the obstacles in our way. Teetering on the edge of thin ice that we could hear splintering beneath us we edged across these hazards. If there were people around, they would often run to help us out, wading through in wellies, saving the day, and more importantly our feet from freezing! Cycling more than 20km per day was a challenge that we often failed. More demoralising was seeing the flat tarmac road opposite us on the Tajikistan side: what was meant to be two easy days on the Tajik side turned into five very tough days on the Afghan side. We had chosen this road, however, and we certainly hadn’t come to Afghanistan for its roads.

Even those 5km were abysmal!

A helping hand on the icerink

Not far to push now!

A more suitable mode of transport

It was the kindness and hospitality of local people that shone through more than anything else during our stay in the country. A people who are too often viewed negatively in the West due to the Taliban, they opened their doors to us and looked after us spectacularly. Everywhere we passed we were presented with tea and bread, and warmly welcomed as guests in their country. In the evenings we were invited in to stay the night, given large plates of rice and had blankets piled upon us to keep us warm. On our first night in Afghanistan Nick was suffering from bad food poisoning. We struggled to the only house within sight and upon entering Nick promptly collapsed in a heap. Our host wrapped him in blankets and looked after the both of us. He slept by our sides rather than with his family and even accompanied Nick outside in the night to the loo off the cliff to protect him from the wolves in his vulnerable state. 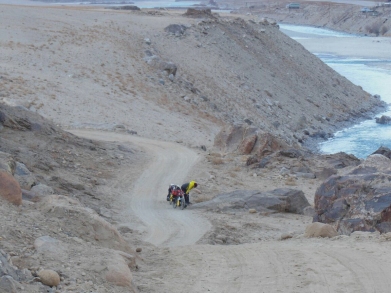 Feeling a little worse for wear 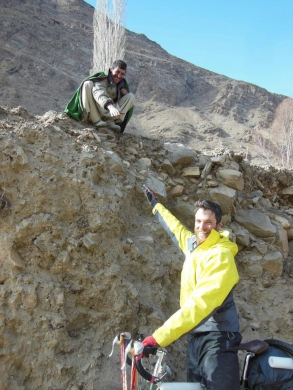 Back on his feet

As we dragged our bikes through sand and mud we got less of the Tajik whistling and shouts of “hello!”, but instead met with stares and stunned silence. Men would greet us in response as we passed, women would often look away. Inquisitive children drew near while others ran and hid. If we wanted to take photos we asked first – men would agree, but women covered their faces and turned away. It was clear that very few foreigners took this road. Villages were few and far between, often just a couple of mud houses with tin roofs. Furnishings were simple, a few padded mats to sit on, which doubled as mattresses and blankets. Electricity was almost non-existent, occasionally a single light bulb dimly lit the main room. Bread, rice and tea seemed to be about the extent of the diet, which they shared with us generously as guests. Invariably there would be a gun leaning against the wall or on a windowsill, so at first we opted to introduce ourselves as Swiss, the global neutrals. But after lots of sign language questions about where Switzerland was, we soon reverted to being tea-loving Brits, which was viewed much more positively. Before departing in the mornings, we paid our way slightly awkwardly in American dollars, which was accompanied with a lot of bowing and big smiles on both sides. 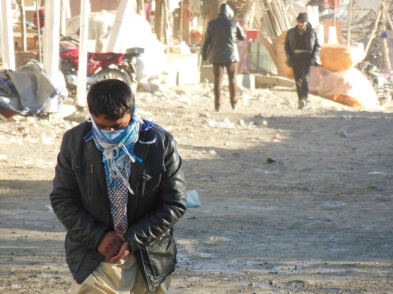 Don’t ride in Afghanistan at night we had told ourselves from the start. Wolves, the abundance of guns in people’s houses and in passing cars, the sub-zero temperatures and awful road conditions were enough to reinforce this idea. So there we were, no house or building in sight, the sun setting behind the tall mountains, an unknown number of kilometres to go that day. $#&@! As usual, it was too difficult to cycle so we pushed our bikes, both of us on the inside, bikes on the outside. Before the last light of day had faded we prepared the deodorant can and lighter – the anti-wolf flamethrower, and the stick, petrol and rag – the anti-wolf flaming stick. And the knives of course. We plodded on, ears pricked and on full alert – a very tiring state of mind. Any sound, any noise attracted our attention. Head torches were on as well as bike lights to warn any armed man that we weren’t sneaking around. This route is apparently one of the biggest drug highways in the world, moving the stuff into Tajikistan before it ends up in Europe. We didn’t want to be misidentified as either traffickers or law enforcers! With no electricity in most houses how would we find a place to stay in the dark we wondered? We certainly couldn’t walk all night… Then there it was, a singular light away from the road. We ditched the bikes and set off towards the light, sliding over ice, climbing between trees and jumping streams. Eventually we made it and found the owner, a quick flash of the torches revealing he was unarmed – a huge relief. Fortunately the kindest man we could have hoped for. He invited us in and gave us food and a room. We call him ‘the Miller’ because he had made a small water-driven mill to grind grain (a man came in the morning with a bag of USAid wheat to grind). He also made use of the stream to produce electricity – the light we had seen from the road. In the morning he was wading in the stream when we woke up, smashing the ice from the night before to keep his mill clear. He was always smiling and cheerful, despite the terribly cold job he was doing. He waved us on our way after breakfast. We couldn’t thank him enough for being our light in the dark.

In Ishkashim, the largest settlement we passed through, our arrival was no less subtle. The whole town seemed to know about us within the hour. We were invited into the border guard’s house for dinner, where he warned us not to go further into Afghanistan as Taliban were present only a hundred kilometres down the road. We made our way into the town centre as we were guided through the streets by a young man, through the bazaar, to a place to stay the night. The bustling activity in the marketplace ground to a halt as we pushed our bikes between loaded stalls. Men smiled, women stared and children ran away – a fitting end to our time in Afghanistan. In the morning we would cross the bridge back into Tajikistan. The adventure was over, we were physically exhausted but extremely happy to have managed what few other people have done before. The Afghanistan we saw was a far cry from the Afghanistan of the evening news back home. We are indebted to the local people for their kindness, generosity and help. Without them our journey would have been extremely difficult, if not impossible.

Border guard had the best house on the river

How many afghani to the dollar? 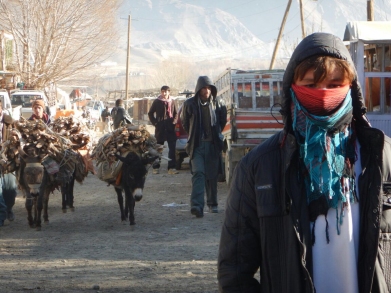 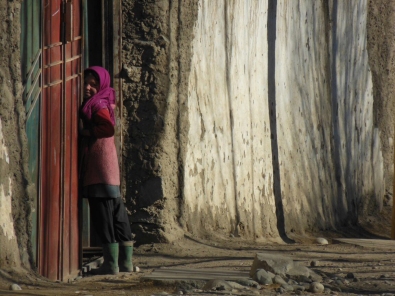 1 Response to Into Afghanistan – 16th Dec