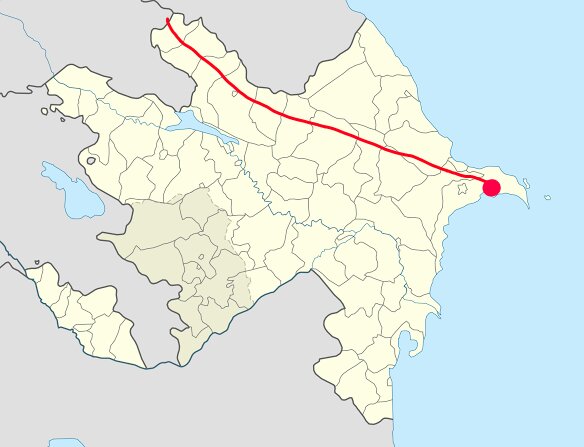 We spent a good few days in Tbilisi resting up, sightseeing and getting prepared for winter – adding insulation to handlebars and brake levers to stop fingers freezing and buying more warm clothes to carry up to the Pamir Mountains. Our host Taylor was unbelievably kind – and didn’t bat an eyelid when we essentially colonized his working space with our bikes and bags – so a huge thank you to him. The cycle to the Azerbaijani border was then a quick 200km up and down another pass, peaking at 1500m. Autumn colours on the trees reminding us that winter was on the way, and warm clothes well worth the investment! My chain snapped within mere kilometres of the Azeri border, drawing a circle of interested Georgian old men. A quick repair job led to many claps on the back as well as being offered celebratory vodka shots. For me this epitomised the friendliness of the Georgians which we had seen throughout the country – and made the ride to the border feel a lot faster too!

The Georgians had erected a big blue sign with the words “Good Luck!” written across it just before the border, not the most comforting thing to see at a border crossing, I thought at the time. But we needn’t have worried: it turned out that the Azeri people were among the friendliest that we have come across so far on the expedition. They seemed to embody both the hospitality and tea culture of the Turkish while adding to it the homemade vodka shots of the Georgians – a potent combination! 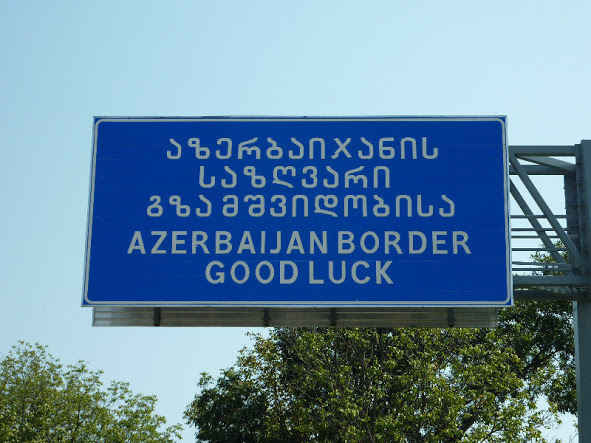 The luck of the Georgians 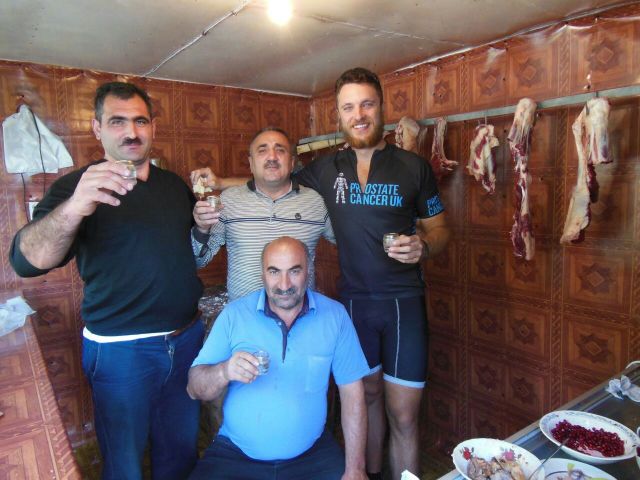 Shots in a butcher’s in Azerbaijan

We knew very little about Azerbaijan before we entered the country, so in case you are like us, here are ten useful facts we now know about the country:

1. Azerbaijan split from the USSR in 1991, and its population is roughly that of Greater London (9 million).

2. Heydar Aliyev (President 1993-2003) is the national hero here. There are statues of him everywhere. His son Ilham is now in charge. 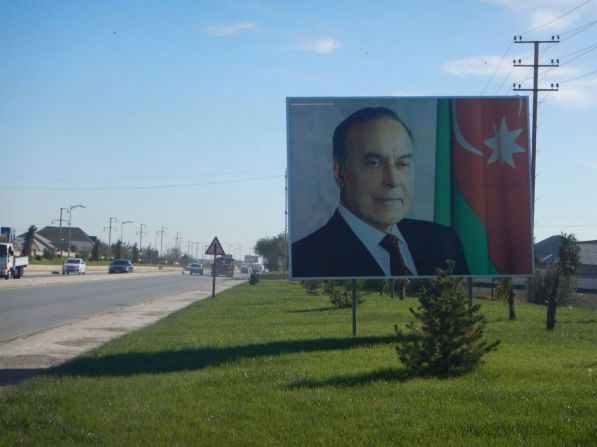 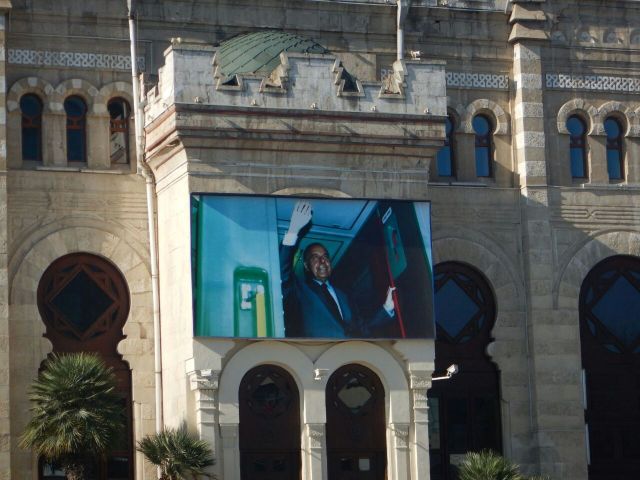 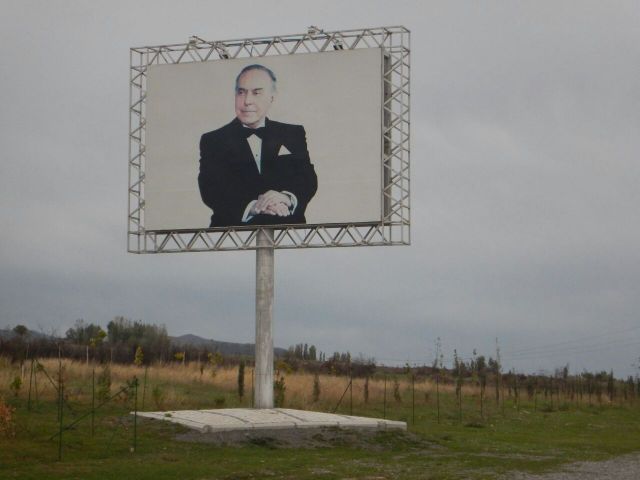 3. The Azeri language is in the Turkic language group which means it’s very similar to Turkish. The elder generation can all understand Russian.

4. Oil. The coastal capital, Baku, was put on the map after oil was discovered in the 19th century. Before then it had a population of 5,000; after then the population grew at a faster rate than London, Paris or New York. During WWII, Baku supplied the whole of the USSR with oil.

5. It has been calculated that at the current drilling rate, Baku’s oil will last another 7,000 years. So no worries there. Makes for some interesting expats in the capital.

6. Perhaps unsurprisingly then, Azerbaijan has a big corruption problem – though this is mostly hidden from tourists as Azeris are embarrassed about it. Most obvious signs are regular checkpoints and patrolling police cars which arbitrarily stop motorists. Our bus in Baku was once stopped and emptied for no apparent reason, the driver detained.

Busted for no apparent reason…

7. Leather is a thing here. Men favour the jacket-beret combo; women opt for the jacket and sometimes the risqué leather jeans option. Combined with elaborate hair gel, walking down the street can feel like a scene out of Grease. 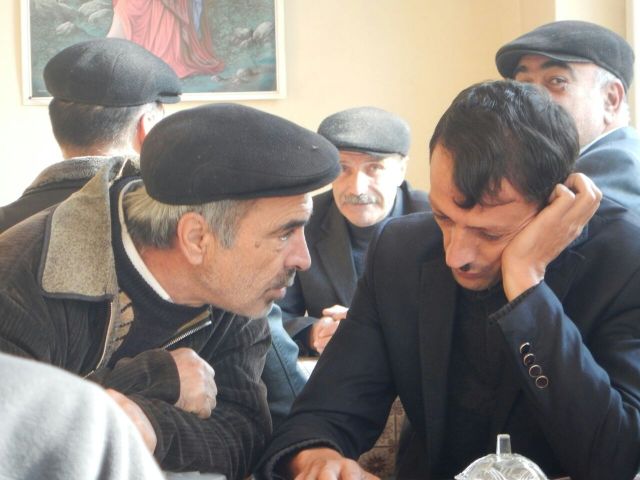 Leather in a tea shop

8. Azeris hate Armenians. As in, really hate them. A string of genocides and land grabbing by Armenia in 1991 has all contributed to this enmity. But as one Azeri said, “We don’t know why THEY hate us.”

10. The worst possible thing to be in Azerbaijan is a gay Armenian.

Just before the border on our last evening in Georgia, we had camped in a cattle herder’s field (a recurring theme for our blogs…). He warned us about the presence of wolves and jackals at this time of year in the valleys below the Caucasus and strongly suggested we pitch our tent near his guard dog. We duly did, which was lucky, because after nightfall the valley was full of the howls of these animals. The jackals are tiny dogs which make an eerie “whoop-whoop” sound, and only bother farmers because a small pack can take down a calf.

These animals added excitement to the evening as two jackals managed to break into our host’s cattle enclosure, prompting him and his mate to rush out to the fence brandishing big burning sticks and howl at them into the night. Entertaining stuff sat next to a campfire, perhaps less so if you’re in the enclosure. So although they both assured us that a man “could easily punch through a jackal’s ribcage” (a good life skill), we decided that from now until Baku, on the Caspian Sea coast, we would attempt the no-tent challenge.

This does not involve sleeping under the stars but safely inside someone’s home, which would also make the evenings much warmer for us. Perhaps an odd thing to think of attempting back home, but in Georgia we had been welcomed in on so many occasions that we definitely fancied our chances in Azerbaijan. Our Russian was improving daily and once people got beyond our beards they found us friendly enough too! For our week-long 500km ride to Baku we overnighted with a whole range of friendly locals on their spare beds, sofas and floors. Fedya, the ex-Soviet mechanic outside the town of Qax (pronounced ‘Kak’) who drove me into town for food supplies in a 30-year old Russian car with doors that couldn’t close; Yusif the town vet and his son, dead keen on wrestling (Azerbaijan’s national sport); Huseyn, the man who gifted us an entire cottage to ourselves for the evening having met us for only five minutes; and Anar, the proud owner of the only proper cafe in the Gobustan desert, who let us sleep in a private dining room after drinking with the locals. The list goes on. Needless to add, we completed the no-tent challenge. 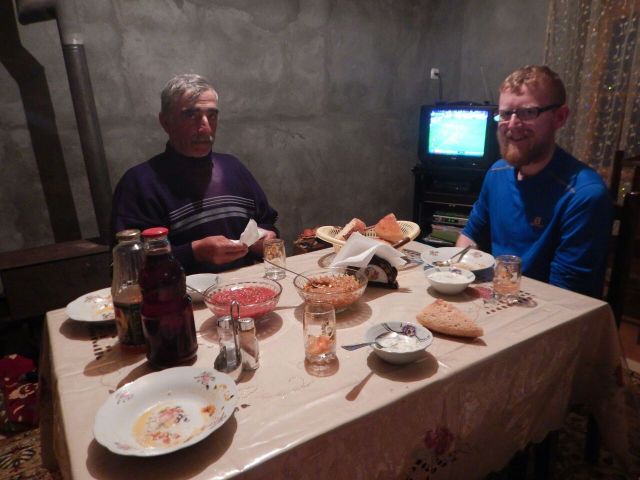 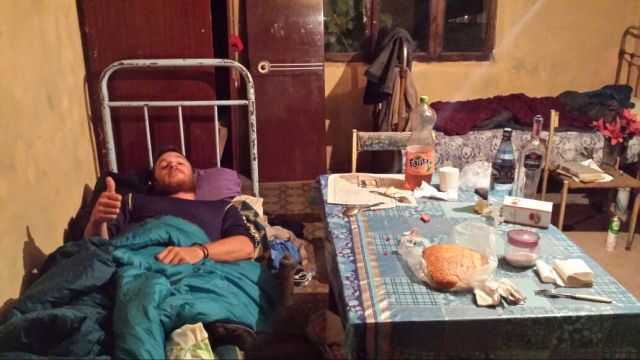 Crashed out after many toasts with our hosts

Cutting a route directly east through Azerbaijan, we experienced an impressive variation in scenery. We started along the foothills of the Caucasus Mountains, just a few dozen kilometres from the Russian border. Passing through historic Silk Road towns, one of which (Sheki) had converted an old caravanserai into a fancy hotel, we then cycled through dense forests, which blocked out the sun and made mornings very cold. Finally, the last 100km as we approached Baku was across the Gobustan desert, where there was nothing but road for miles on end – a taste of the much larger deserts to come in Uzbekistan. 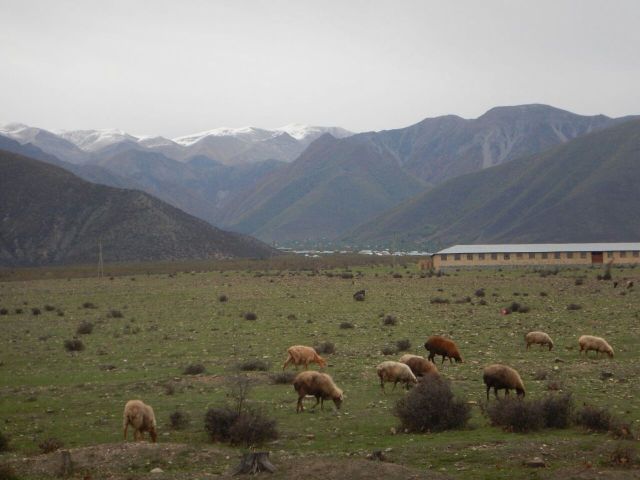 Tea in a Sheki caravanserai 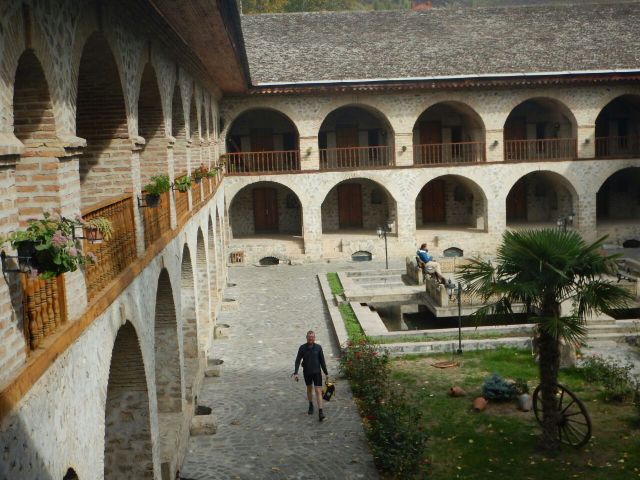 The caravanserai, rest stop along the Silk Route

The desolate landscape of the Gobustan Desert nr Baku

Azerbaijan was not without its difficulties however, as Lobby’s next blog will point out. Between forest and desert sections we passed through a slow 20km stretch we called Nutter Valley. This was a pocket of poor countryside on the climb up from a riverbed, and the atmosphere was very strange indeed, bordering on threatening. As we inched our way up the hill at essentially a walking pace we were approached by a horseman. We were quite happy chatting away until he demanded my front panier as a “gift”. I initially tried to laugh him off but he persevered, and we ended up having to stop to confront him – at which point the presence of police patrols was much appreciated! Then as we summited the climb we were pounced upon by some nut-selling kids (hence the name we gave the valley) who we surmised were probably on drugs. One popped up later on and tried to grab my spare wheel too! These incidents are incredibly rare but remind us that we remain a source of attention wherever we go. Far more good guys than bad so far, but pockets like Nutter Valley are worth looking out for! 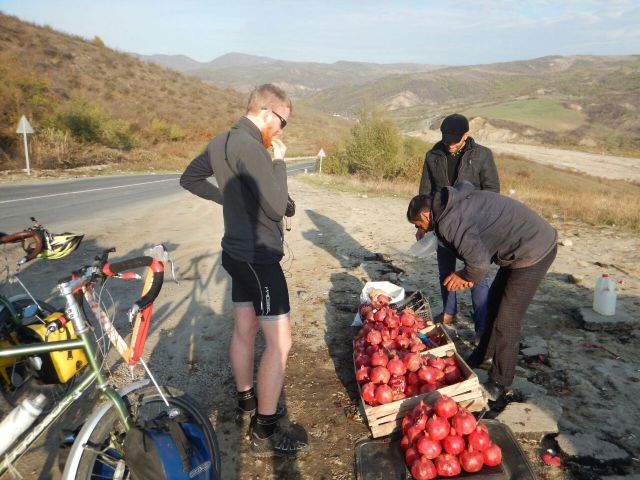 Pomegranates before our descent into Nutter Valley

October is very much wedding season here, which apparently contrasts with November, an inauspicious month for wedlock. In practice this meant coming across two or three wedding car processions per day, as bride and groom with entourage were whisked off to a wedding banquet somewhere in the countryside. All the cars were decorated with red or white ribbons, flashing amber hazard lights and merrily honking their horns – sometimes preceded by a camera crew training its lenses towards the cavalcade from the back of an open jeep. Considering Azeri hospitality it was only a matter of time until we were invited to a wedding feast, which happened on our second day in the country. We schmoozed and drank with the musicians before the guests arrived, and stayed on until both bride and groom were established on their personal high table. Simultaneous pyrotechnics and confetti as they entered nearly set the bride’s dress on fire, so we were glad to be sitting near the door! Interestingly, men and women still wore very dark coloured clothes (our yellow raincoats clashed conspicuously) and they sat apart on same-sex tables. Very limited opportunity for a would-be Wedding Crashers moment then. 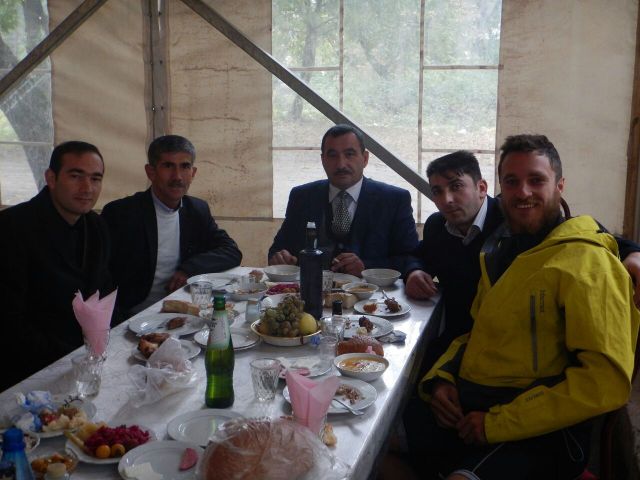 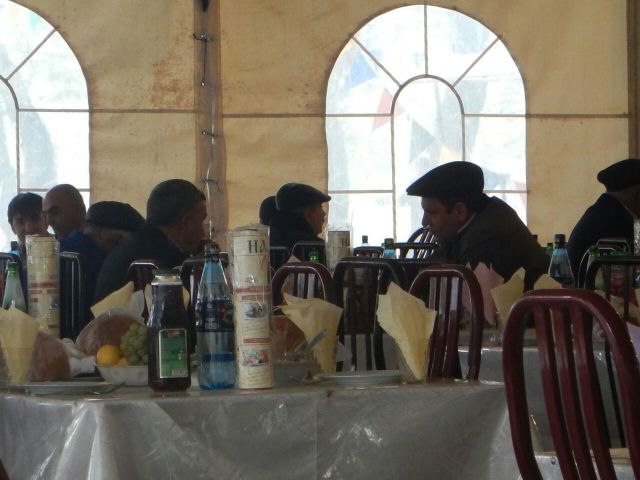 Berets segregated at the wedding

The last stretch towards Baku and the Caspian Sea was particularly barren as we crossed the short Gobustan desert. Both our bikes decided to misbehave at this point, creating one final hurdle before the capital. Strong winds managed to topple my stationary bike as we stopped for a rare cay in a run-down cafe. Unfortunately all 50kg of bike and luggage fell domino-effect onto Lobby’s, twisting his metal kickstand out of its socket, bending his mudguard and jamming his brakes. Not my finest hour! However in an unprecedented bout of resourcefulness we managed to fix mudguard, brakes and even reattach kickstand (try miming the word for “pliers” to the only garage within 50km) in under an hour. Combined with the reattachment of my snapped chain which had so wowed the locals in Georgia, together our bike repair skills have come a long way since London! 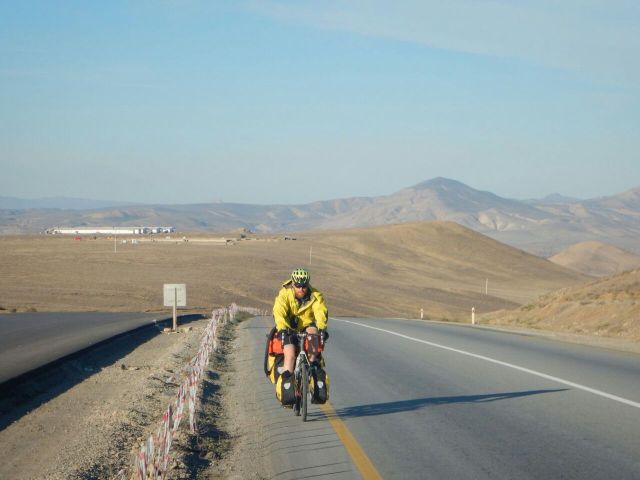 Barren riding across the desert 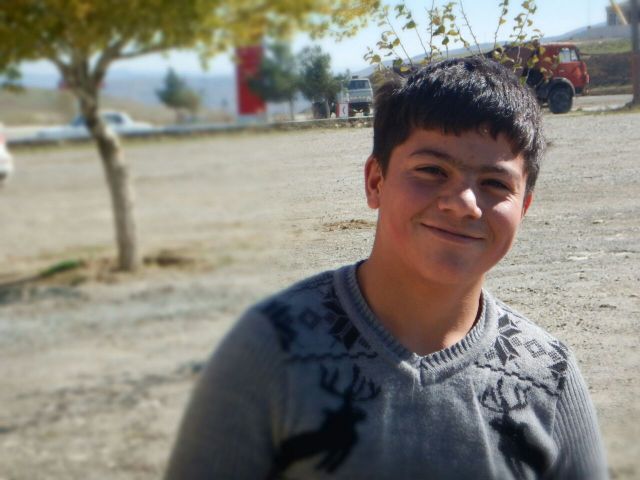 Azeri kid at the cay-repair stop

Suddenly we spotted water: desert turned into frantic construction, sand was swapped for dusty smog, and towering glass high-rises reflected the glinting sun in front of the sea. We had arrived in Baku.