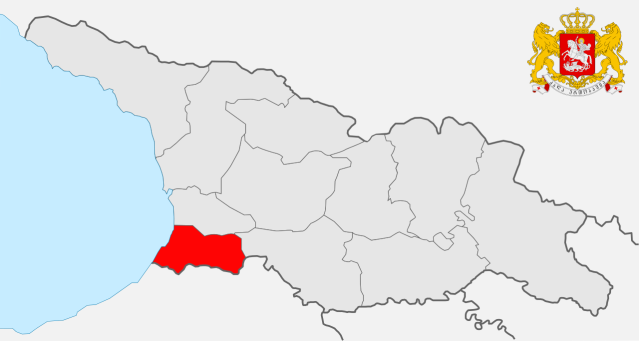 Full of tea, chicken kebabs and baklava, and with our new route mapped out, we headed out of Turkey to Georgia, towards the Caucasus Mountains. From a devout Muslim country we entered a strongly Christian one. The new language and alphabet we were faced with were completely incomprehensible, but at least cheap and readily available booze was back on the menu!

The last building on the Turkish side before customs is a large mosque. Call to prayer blared out from the minaret speakers as we rolled past. Juxtaposed on the Georgian side is a large church. Each can see the other; in a kind of Wild West standoff they face one another. We eagerly cycled up the coast towards Batumi, the so-called Las Vegas of the Caucasus, to see what this new, fairly unknown to us, country had in store. 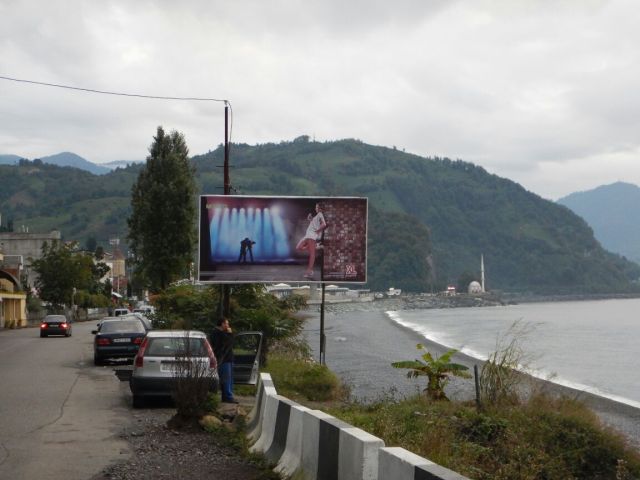 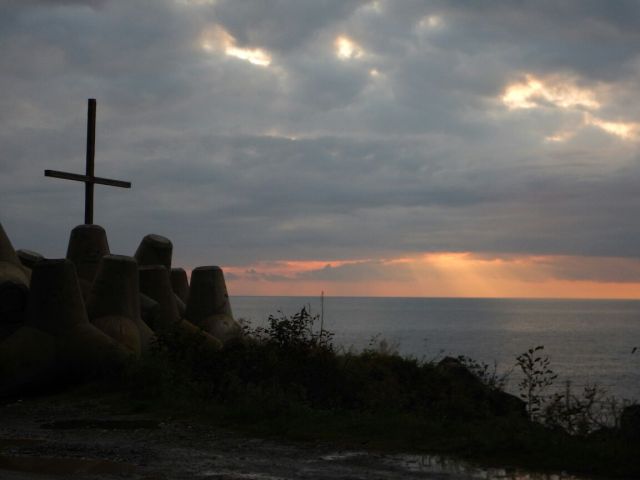 The first thing that became very obvious to us was that we were going to struggle with the language, especially reading it. This was the first script that we couldn’t even guess at how to pronounce. We were later told that the Georgian alphabet is one of only twelve alphabets in use (not sure about the accuracy of this – Google has no definitive answer) and it is one of the oldest dating back over two thousand years. The Georgians are an extremely proud nation, being particularly proud of their alphabet – there is even an Alphabet Tower in Batumi devoted to the written script! 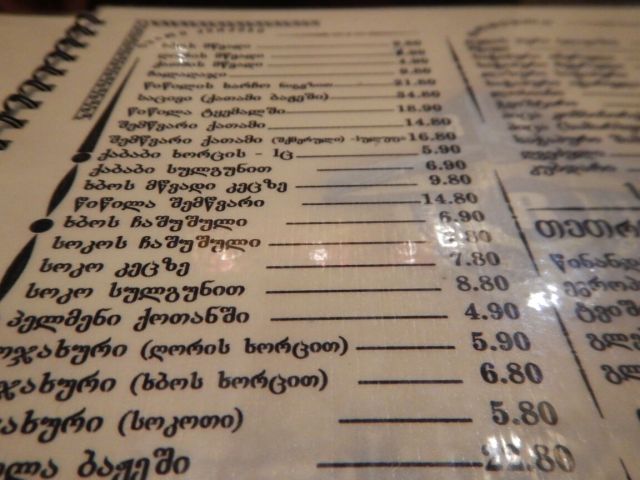 What would you order? 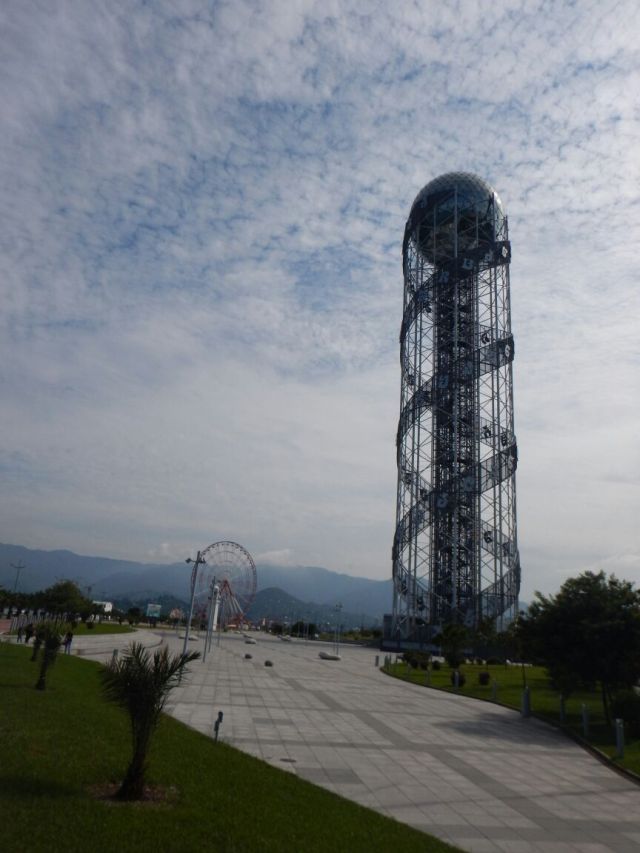 We had heard a lot about Batumi from people in Turkey. Young Turks spoke of its wonders and delights, portraying it as a paradisiacal playground. On arrival we realised that it was just the readily available alcohol and the little bit of Georgian leg showing that so excited these young men. Batumi was less Las Vegas and more Blackpool. A horribly distasteful amalgamation of uncoordinated architectural styles – combining European, Oriental, Modern, Socialist-Realist and even mock Gaudi, complemented by huge new-build hotels complete with a ferris wheel stuck on the side of one, bright lights, wide boulevards and palm trees created the perfect set for the next Hangover film! Despite its gaudiness, flare and passion, Batumi was somewhat a ghost town caught in the depths of an off peak lull, making the whole scene even stranger. Alcohol, pork and neon lights were a welcome change and the town proved a much needed rest stop before we finally left the Black Sea. 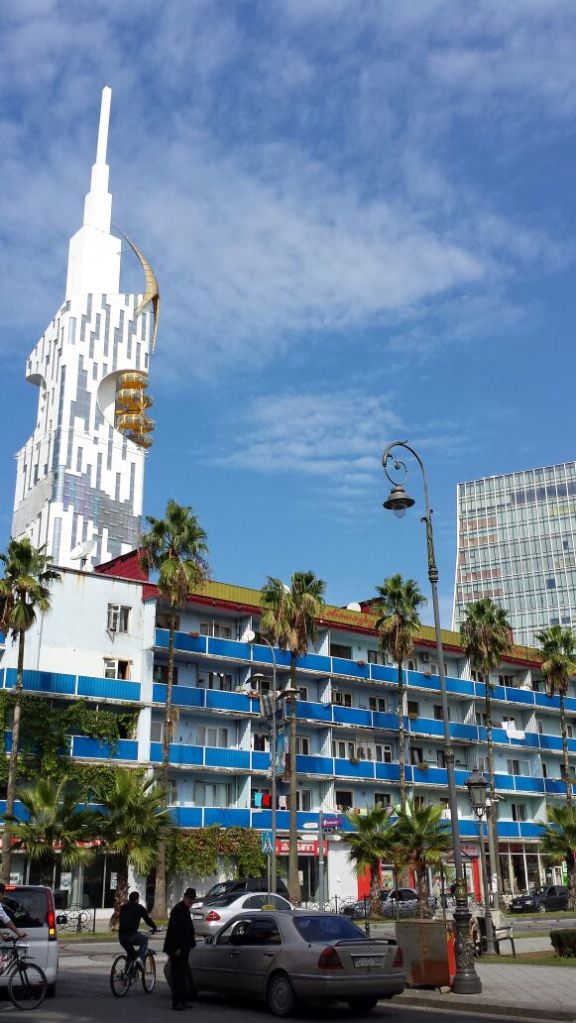 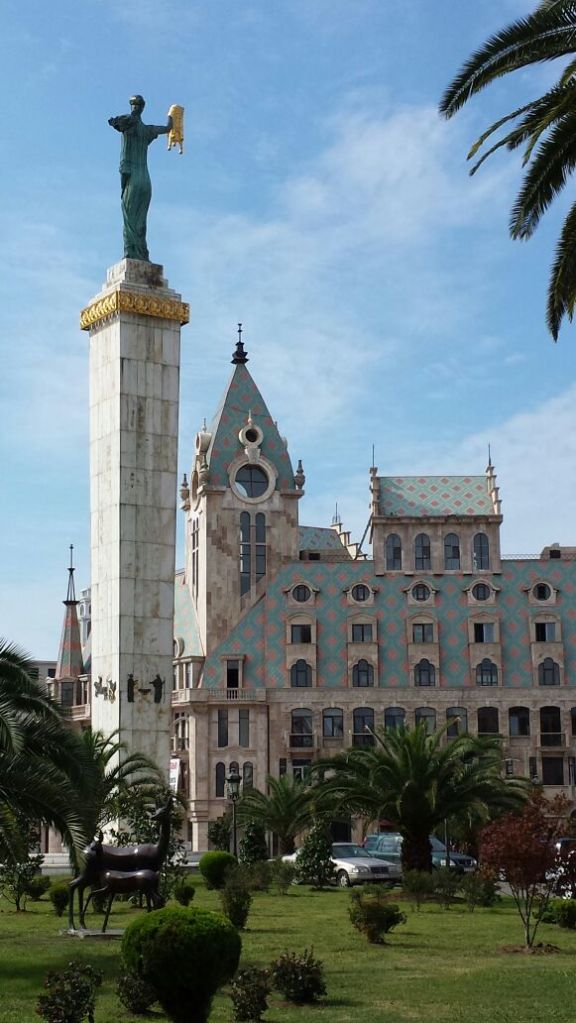 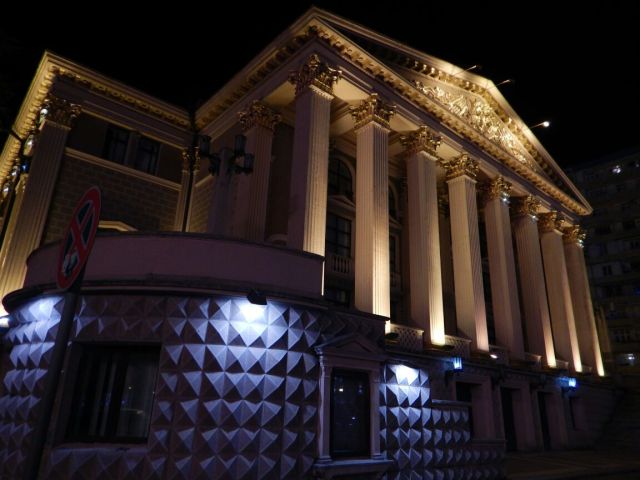 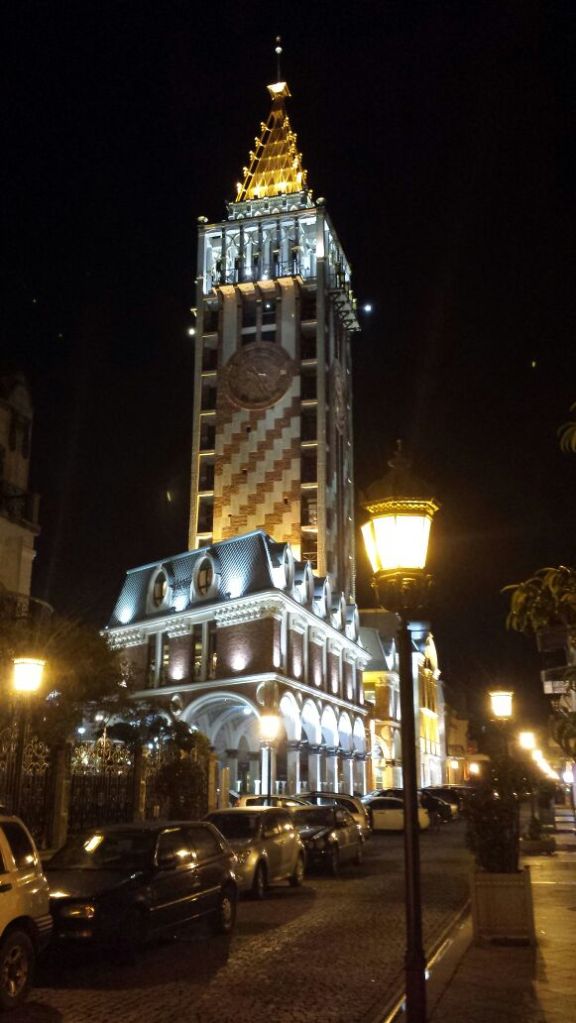 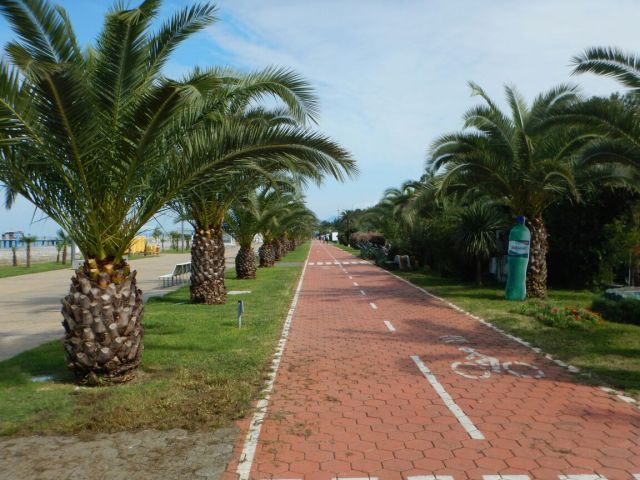 As we devoured our way through a new cuisine of meat, meat pies, cheese, bread and the national dish khachapuri (lit. cheese bread) we felt in our element. “Don’t even think about ordering the Adjara version of the national food if you have high cholesterol or any real health concerns”, one blog had warned. A fairly raw egg, floating in a lake of cheese, filling a basin of bread came. Enough calories sat between us to take down a small elephant. I took out a large slab of cheese from the molten goo, bit into it – butter! The Georgian cuisine, heavy in carbs and calories is perfect for the long distance cyclist. Fresh bread can be found all over, baked in tandoori ovens, hung on hooks to sell and eaten hot. In Tbilisi we encountered Georgian dumplings with various fillings. I wanted the full experience so ordered one of each flavour, a dozen in total. The waitress, a bit taken aback, obliged and later presented me with a feast platter of the very large (I thought they were quite small!) dumplings to work my way through. Later on I read that the pinched dumpling dough that forms the top is not generally eaten, doing so is a mark of being poor and/or uneducated – whoops! 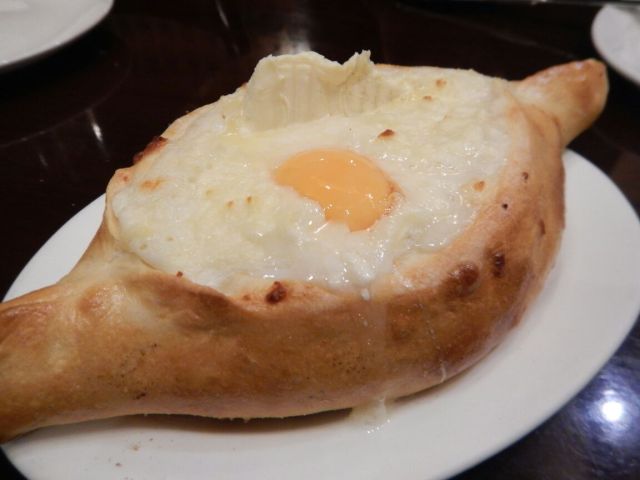 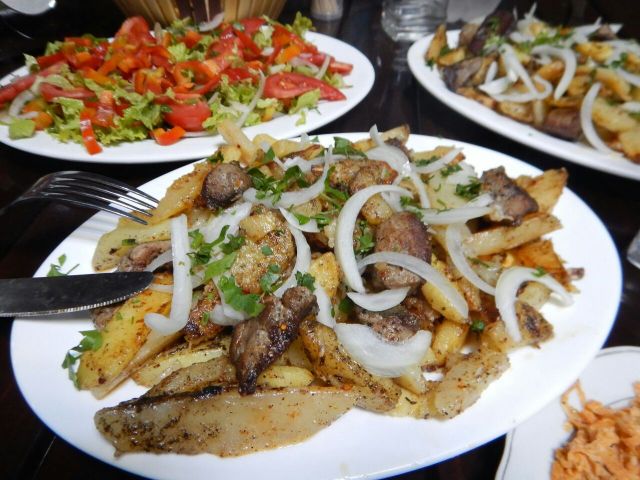 Rested up we forged inland towards Tbilisi. Between us and the Georgian capital lay Goderdzi Pass standing at a height of over 2000m. An online blog recalled one man’s journey up the mountain, having to turn back after 100km because of snow and inclement weather. There would be no snow on this occasion for us. That is reserved for the Pamirs.

We snaked our way up the mountain, stopping at a winery where Hillary Clinton had once lunched. “If it continues like this it won’t be too bad!” we joked. Wine is famous in Georgia and widely drunk. Professionally-made wine and homebrew wine, however, are only related by the word wine itself, the latter being a very loose definition of wine, as we found out when Nick stopped at the roadside to buy a litre. It was stored in a large glass vat, and siphoned into an old coke bottle using a length of hose. Reminiscent of petrol in colour and smell we packed it away for later. Camping on a football pitch that night was a throw back to Germany, although this time it was rather cold! 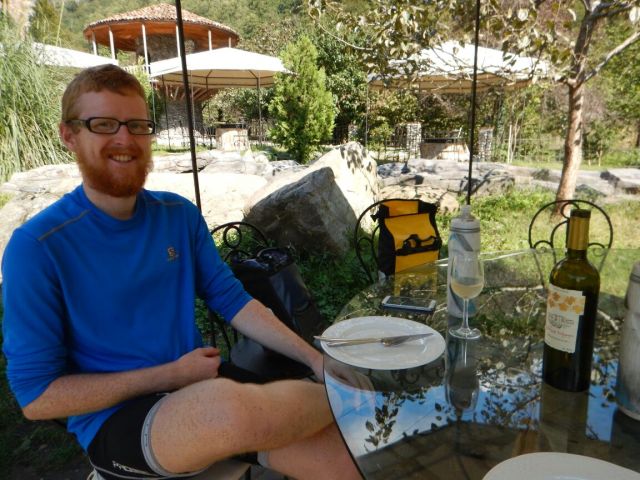 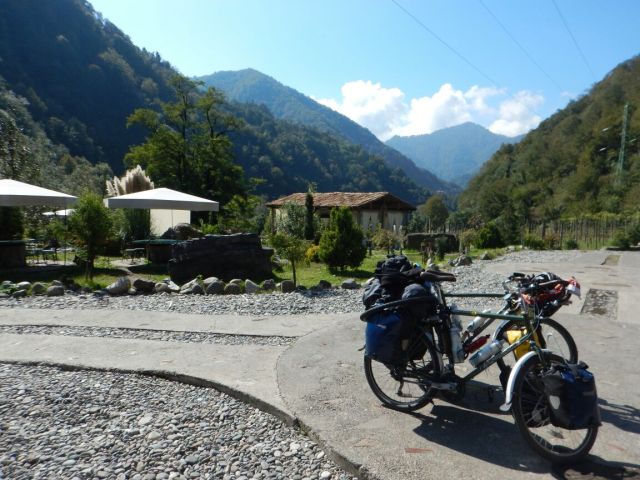 Bike with a view 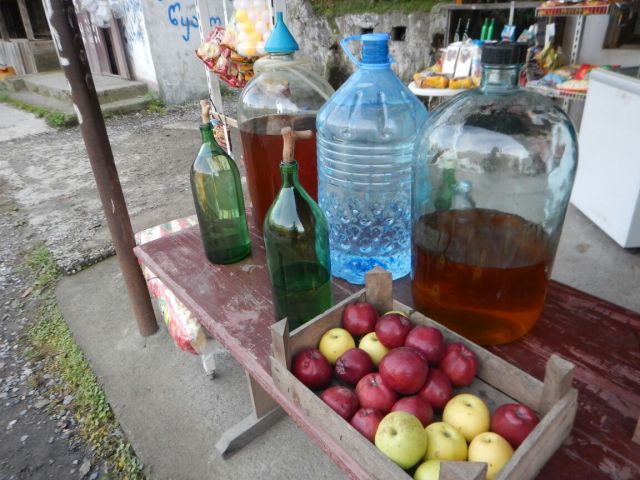 Forging on, the tarmacked road ran out and became dirt track. We passed several United Nations Development Projects on the climb, new wells to provide drinking water, new residential buildings, as well as a hydroelectric power project. Road repair would have been more beneficial to us at that moment as we crawled up the crumbling, potholed wreck of a track. Averaging less than 7km/h was draining both physically and mentally. We began calculating whether the 30km to the peak would take four, five, six or more hours. Cars and vans managing 10km/h occasionally passed, remaining in view for some time after, marking out our path. We emerged above the tree line and became subject to strong winds, battering us as we climbed ever more slowly. Eventually we reached the summit, looking back upon a fraction of what we had climbed in all its beauty. A solitary ski lift, motionless in its green and brown surroundings reminded us of the impending snowfall. A singular figure appeared in the distance, approached us and asked if we needed a hotel. He pointed us in the right direction and then disappeared from sight. 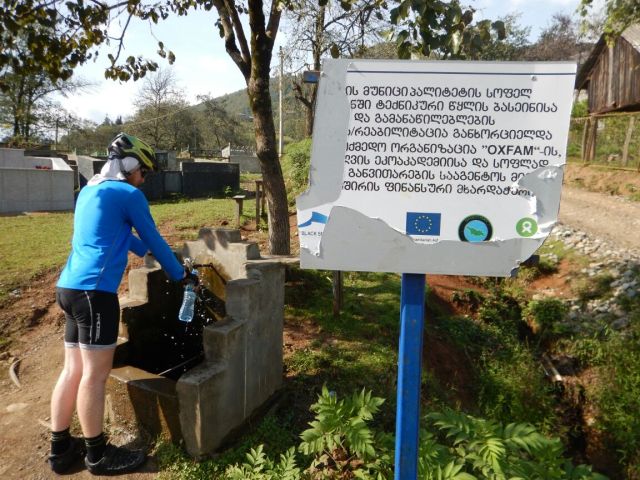 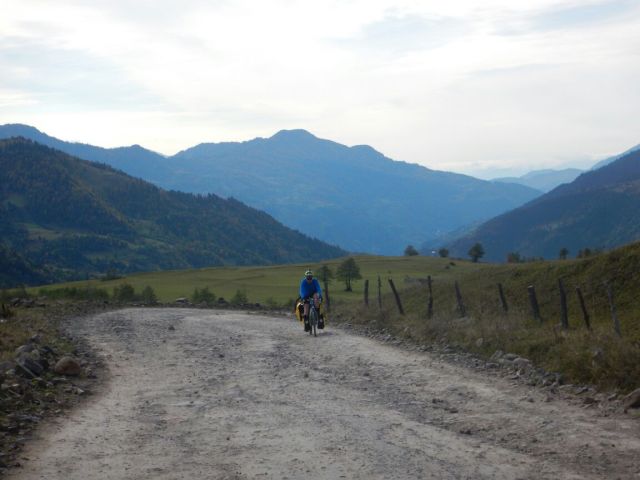 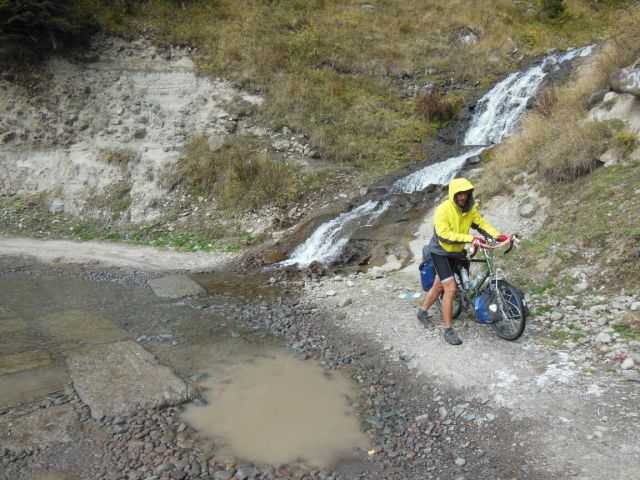 The going gets tough! 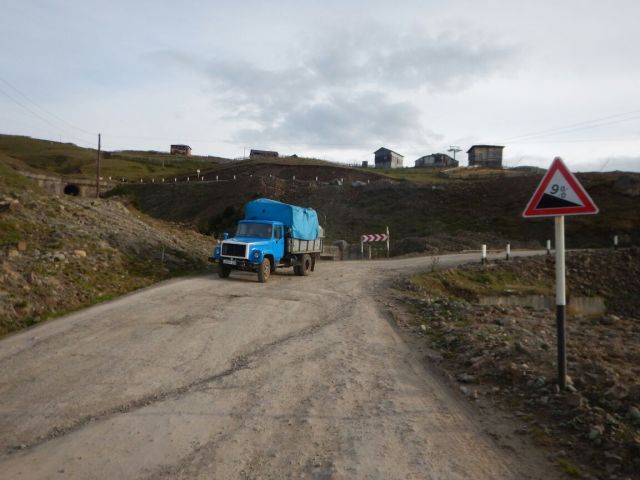 Even the trucks struggle 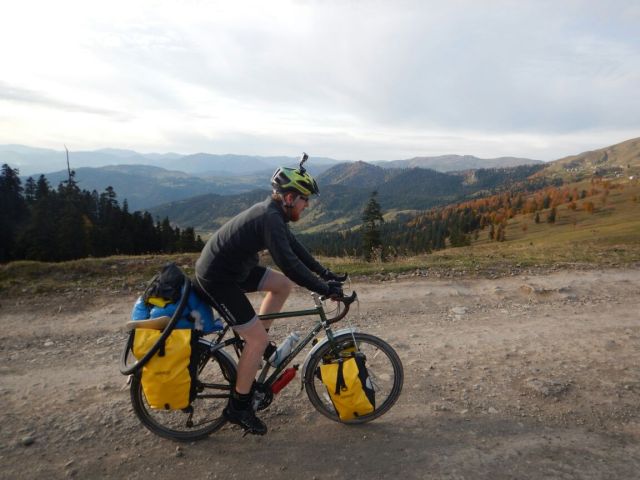 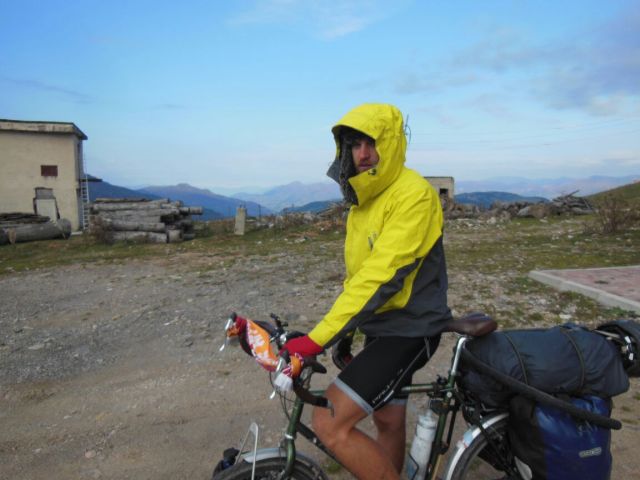 Cold on the top 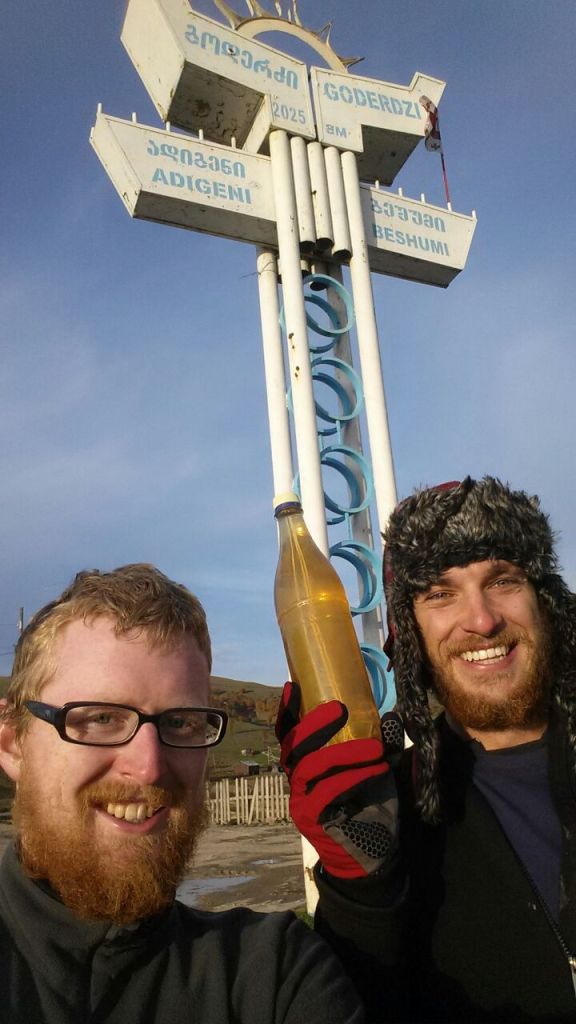 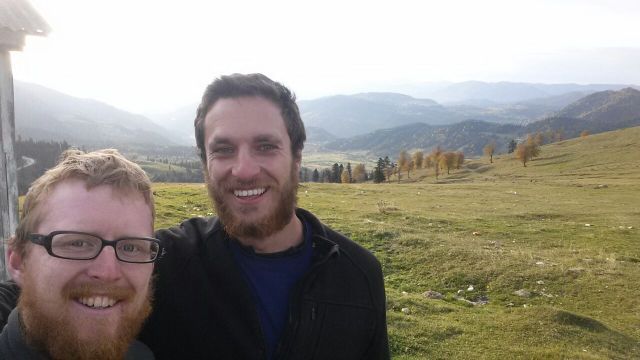 The view is worth the climb

This lonely hotel atop the pass shone brightly in the dusk, offering warmth and comfort. Deserted, but for an elderly couple, him watching television, her peeling garlic by the heater, it was sure to be our home for the night. We enquired to the man about staying the night. He gestured nonchalantly to the peak ski season rack rate. We pointed out that the hotel was empty, the prices therefore unreasonable. He didn’t budge, “lots of workers would come after work”, he snapped. After a long drawn out conversation in Russian, asking to sleep on the floor, in any old room, anywhere that was mildly warm, we had gotten nowhere. We ordered food and huddled by the fire hoping that we could reach an understanding after food. Two workers did come, they ate a little, smoked and left. We made use of the Wi-Fi and sat it out savouring the recently purchased bottle of ‘petrol’. We showed the man videos from our GoPro, attempting to warm him up, he smiled for the first time, melting a little of his icy demeanour. We asked again about staying. He sat pondering for an age, a grave look across his face, and eventually agreed begrudgingly to us sleeping on the floor in one room. We said we’d be up at eight and then off down the other side of the mountain.

At seven thirty he burst in through the door, announced something in Georgian, crossed the room, unplugged the electric heater we had found the night previous and left. The howling wind in the night left us glad we weren’t camping outdoors. Following this rude awakening we got ready slowly, hoping to delay our exit so that the day had time to warm up before we entered it. The previous night, on trips to the bathroom, we had seen the old man sat in the small space between the outer and inner entrance doors. Sat in full military-cum-hunting gear, huge torch in one hand, chainsaw by his side. Whatever foe he was waiting for was in for a surprise. The next morning, after our wake up, he had retaken his position by the door. By eight o’clock he was frantically beckoning us to leave. We couldn’t understand the rush but he got more irate and agitated. Making kicking gestures at Nick (not a wise move for a small man) he basically chased us out. Any warmth he’d shown the previous night had truly refrozen. By the time we left, earlier than agreed the previous night, he had already complained incessantly to his wife and was sulking in the corner, back turned. An anomaly in a country of such welcoming and hospitable people!

We braved the cold and made our way downhill towards Tbilisi via Gori, Stalin’s birthplace.

Thanks for reading! If you enjoyed this blog and others please click here to donate to Prostate Cancer UK. Thank you!