We are underway!! It seems like quite a long time ago that our team of four was cosying up in a two-man flat in Tooting preparing for this expedition, but really it’s only been slightly over a week. A lot has happened since – we’ve pedaled 700 kilometres across 5 countries and are now just inside the German border gorging ourselves on football euphoria and bratwurst. We’ll write some stuff on here – and hopefully upload some videos – when the Wi-Fi is good enough and we’re not sat on our saddles heading East.

We’re not particularly keen cyclists. That answers the first question we get asked pretty much everywhere we’ve been so far. I mean, I guess we look like keen cyclists (wrap around sunnies, all the bike add-ons and far too much lycra, you get the picture) but to be honest the furthest we’ve managed in the last year has been to lectures and back, and even that was a struggle sometimes. Who wants to cycle in the rain for instance. It’s awful. If you’d told me last year that I’d be cycling half way round the world today I would’ve laughed at you. But somehow here we are!

I guess brinkmanship had a lot to do with it, when “I bet you couldn’t —” turns into “what would happen if —“. Add to that the opportunity to take some time off, a phenomenal physical challenge, seeing landscapes and people change, and the chance to raise money for a fantastic cause – those are the key motives for taking this on.

Prep time was pretty limited, in that we were still enjoying our extended exam period three weeks before departure. The small flat in London turned into base camp for a week as we went on first aid and bike repair workshops and mountains of kit piled up in every corner. Then we bought the actual bikes (four days before departure, nothing like breaking the saddles in) and they were added to the solar panels, satphone, tents, roll mats and bike panniers which now dominated base camp. There were actually no beds in which to sleep, so at least we broke the roll mats in!! Will and I did a little cycle from Cambridge to London the day after the Tour de France peloton passed through and found new muscles we hadn’t known existed. Maybe this trip would be tougher than we’d reckoned, we thought. A lovely little send-off party at the Windmill in Clapham on Friday and early the next week we were in front of Buckingham Palace “ready” to go, a lap up the Mall to test out the acceleration on the heavily loaded bikes. 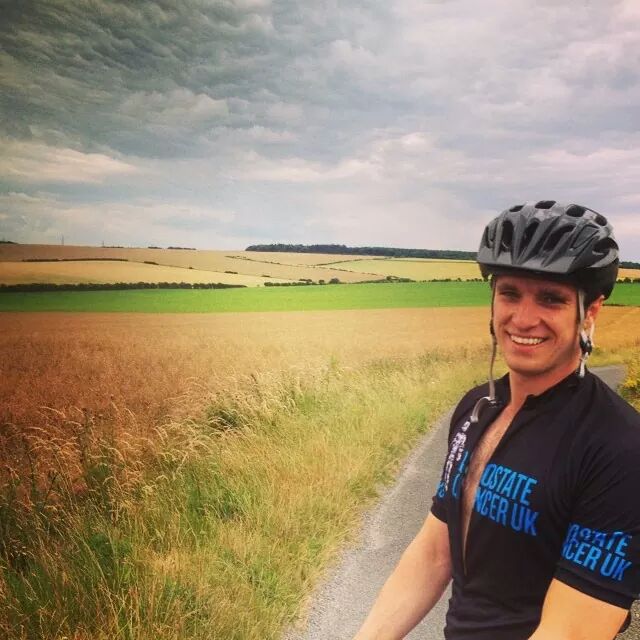 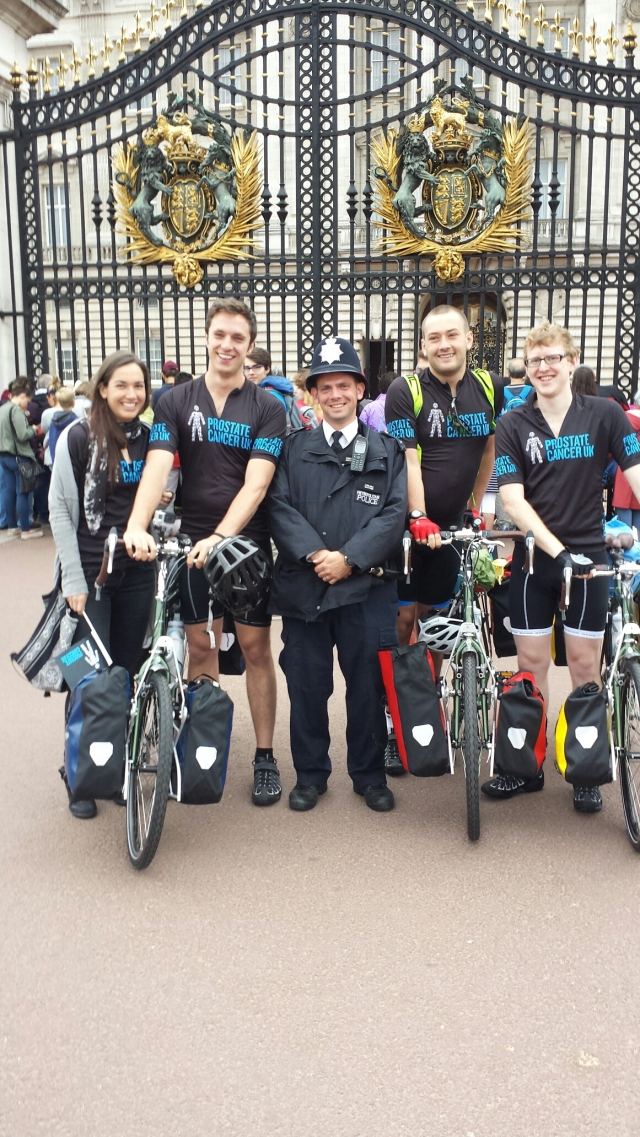 Now the first leg out of London didn’t go particularly well. The weather held for the Palace but then it sheeted down with rain until the ferry. The panniers are (now) waterproof. I took the wrong exit out of Buckingham Palace to be stopped by a policeman, unfortunately snapped by someone in the send-off party so now no one will let me forget it! Lobby (Laurence) then decided to test out the durability of our newly bought Go-Pro by chucking it underneath a London bus (miraculously, it survived). And finally George, who had planned to do the first leg with us, raced ahead in the driving rain having given us phone and wallet, and that’s the last we saw of him!! An unsuccessful call to a Morisson’s shop in Sidcup for “Missing Person – George” (which looking back on it probably stressed the cashier out unduly) and a Fed-Ex package from Maidstone that evening, where we spent the night. See you for the China leg George. Keen to leave the UK rain, we were onboard a ferry to Dunkirk full of bemused truckers by the afternoon of the next day.

Being sensible Brits, we spent as little time in France as possible. Instead we headed over to northern Belgium after a French boulangerie breakfast on the border, passing through the Flanders region which saw the bulk of Western Front fighting during WWI. A week of very striking cemeteries in towns like Ypres and Lieges, as well as historic old town centres in weather which quickly turned from drizzle to baking hot. Our route eastwards through Belgium was basically flat, so we were able to divert to the homes of Stella Artois in Leuven and Hoegaarden for a taste of famous Belgian beer. The Belgians don’t seem to mind you drinking at 10am and in fact we saw many locals outside in the sun having their brunch pints. Here I’d like to point out that from what we saw of Belgium, not a huge amount of work seemed to get done. On Sunday we struggled to find anything at all that was open, but that seemed to extend to Mondays as well. A cunning regular three-day weekend. In the words of a Belgian bloke we met, “We are relaxed. If it’s sunny, we drink a beer. If it’s rainy, we drink a beer.” Belgians also seemed mad about cycling (one of their national sports) which was great for bike lanes and bike shops but slightly demoralizing when you’re overtaken by a team of seniors up a hill!!

One of the most memorable stays in Belgium was at a place called Ghent, which we used as a luxury stop from which to watch the World Cup final. Tents away it was hostel time, which meant showers and even some washing upon the receptionist’s polite suggestion. Ghent is an extremely picturesque old town straddling a river, which has what is basically a complete fortified castle in its town centre as you round a corner. There are also many little bars down many little alleys. The combination of the German football win and finding a home-brewed shots bar escalated the evening for many in the hostel including our team. Respective Eurotrips turned into one big Eurocarnage as hostel goers were allegedly spotted running around the cobbled old town “doing the airplane” with arms outstretched and all the right sound effects. An American sprained ankle and many impromptu day-extensions to the beds in our hostel might substantiate these reports. In any case we decided to stay the extra day for moral support.

From Ghent we headed to Brussels and the weather really stepped up, now reaching +35C with highs of +40C. We hadn’t thought heat would be an issue at this early stage, but have since had to readjust our cycling routine to avoid the middle of the day. Up shortly after dawn, minimum faff and a lot of miles before lunch, the reward being a civilised continental lunch break of about 4 hours.

The last two nights we’ve been fortunate to have been put up by some friends, the Brown family just to the east of Brussels and a Belgian family in a town near the border with Holland. So more showers and even a swimming pool! Thank you all very much for taking us in. By the time we left Belgium we’d eaten what was claimed by people we’d met to be the best croissants, pains au chocolat and waffles in the country. A slightly dodgy overnight in the southern tip of the Netherlands yesterday (where our campsite was nearly combine-harvested by the farmer whose fields we’d pitched our tents in) and even dodgier haircuts for aerodynamics and heat control (and to be honest no trip is a proper trip without a stupid haircut) and across to Germany this morning! 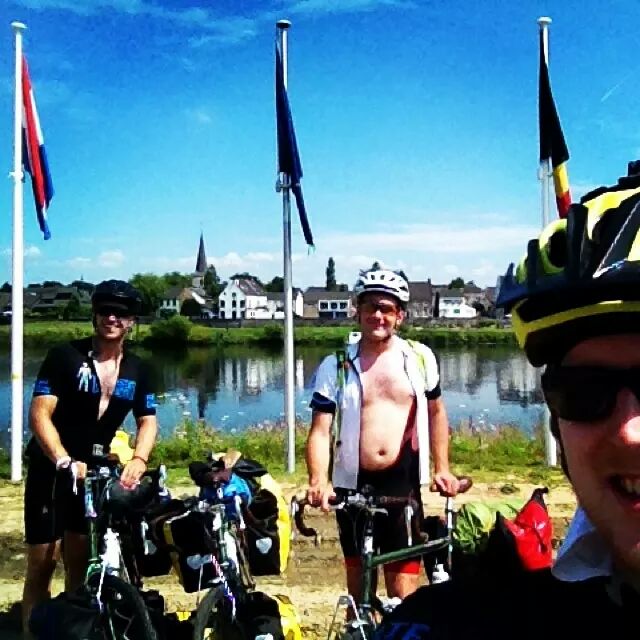 For anyone keen to know our route, we aim to head for Cologne today after a mid-afternoon nap (it’s 43C as I write), then down to Bonn to follow the Danube east. Still on track for Istanbul at the beginning of September! It has been fantastic that so many of you have donated – we’ve reached 10% of our huge target within the first week! – so thank you all very much. It makes a significant difference on the hill climbs to be sure. So please do keep those coming! Next report will be when we near Munich on our southern Germany leg!